Lacing Up with Kaci Lickteig

Throughout the race, runners face rugged terrain, snow at the highest elevations and sweltering heat in the low valleys. The race begins at 5 am and continues through the day and into the night. In her third time running it, Kaci’s winning time was 17 hours 57 minutes. 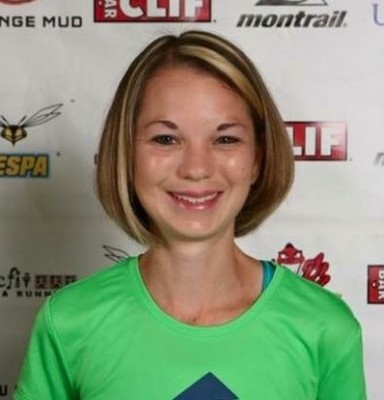 Kaci’s running career got off to a reluctant start right before her junior year in high school. Her best friend was on the cross country team. They needed seven runners to field a team and only had six, so she talked Kaci into it. “I kept telling her that I don’t run. I’m not a runner. Finally I agreed to it,” said Kaci.

“My first day of practice was hilarious. It was a two-a-day and I had never run more than half a mile. They had us running a mile or two in the morning and then again after school. All I was thinking is that you’ve got to be kidding me. I’m not cut out for this,” said Kaci. “But because I committed to it and was part of the team, I was going to stick with it.”

That first year, she walked a lot and was usually the last person on her team to finish a race. But she discovered a passion for running that stuck. “I loved that I had my own personal goal, but contributed to the team. I had to work as hard as I could for both myself and for my team.” Around the same time, Kaci’s mom quit smoking and picked up running as a hobby. They would run together and do road races on the weekends.

Moving up to ultras

Kaci kept running through college as a walk-on at UNK. After college, she started running marathons, which had always been a goal.

Her first ultra was a 50k trail run in Kansas City. “I had no idea what I was getting myself into,” said Kaci. It was February. It was freezing. It was a single track trail that I had never been on. I was just planning on having fun with my friend who talked me into it. And that’s exactly what I did. It was the most fun experience I’ve ever had at a race. From then on, I was hooked.”

“I never thought I could run that distance. You’d be surprised by what your body can achieve relative to what your mind can believe. It’s such an amazing feeling to push past what your mind tells you that you can do. Words can’t describe what you find in yourself.”

It was fitness that pushed Kaci toward physical therapy as a career. Growing up, she worked at a local gym and helped out with personal training. She loved it, but it wasn’t quite what she wanted to do. Someone suggested physical therapy. “With physical therapy, you’re doing personal training, but you’re also bringing someone along and helping them get on the road to recovery, which is so rewarding. I started doing some shadowing and volunteer work and knew that was the line of work I wanted to pursue.”

Kaci manages the inpatient clinic at the Midwest Surgical Hospital in Omaha. “As an inpatient physical therapist, I see patients as soon as they’re getting up for the first time after a major procedure, such as a total joint replacement or a spinal fusion. It’s so inspiring to see their relief and contribute to their recovery. I love my job. I love working with patients – they inspire me.”

Juggling the demands of racing and training

Kaci typically runs six or seven days a week. During the week, she runs 10-12 miles a day. On the weekends, she does bigger volume runs of 20-40 miles, sometimes doing 50 mile races as training runs. “Running never feels like work. Training and racing are my reward, it’s fun. I love it.”

One of the many remarkable aspects to Kaci’s success is that many of her races are held at high altitudes over mountainous terrain; yet, she trains in the flat plains of Omaha. “To deal with the hills, I try to get really fit. And I sometimes run local trails on the weekend, doing 200 foot climb repeats. It’s not the same as a mountain, but you have to work with what you have.

Being physically active helps her relate to her patients. “While I don’t know what total joint replacement pain feels like, I do know what knee pain can feel like. It helps me be patient and encouraging to the people I’m working with, motivate them to get up and know that they’ll be better than they were before.”

Kaci came to ATI as part of Community Rehab Physical Therapy, where she has been since 2011. “It’s been wonderful becoming part of ATI. They’ve been great. They’re very good communicators, it’s been a smooth transition, so just a great experience. I really like that they seem very community-driven. That’s important to me.”

Her next major goal is to qualify for the Hardrock 100, a tough mountainous race held in southern Colorado’s San Juan Range. With a cumulative climb and descent of over 33,050 feet and an average elevation of 11,000 feet, it has tough qualifying standards to help ensure runners are adequately prepared for its challenging course. “To qualify, in September, I’ll run the Bear 100, which will get me a lottery ticket to hopefully qualify for Hardrock. Each year, they limit the field to about 150 runners out of 1000 applicants. This one is on my bucket list.”

Lacing Up with Kaci Lickteig
Newsroom

ATI Holdings, LLC, Athletic and Therapeutic Institute of Naperville, LLC or any of their affiliates, parents, subsidiaries, predecessors and successors, complies with applicable Federal civil rights laws and does not discriminate on the basis of race, color, national origin, age, disability or sex.

Language Assistance Services
If English is not your primary language, language assistance services, free of charge, are available to you. Call 855-MY-ATIPT (855-205-4916).